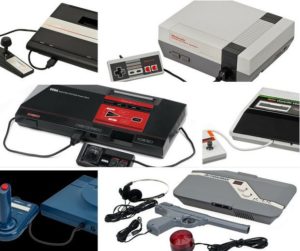 The 8-bit era was ushered in with the release of the of the Nintendo Entertainment System in 1983 Japan, the console that would be king. While the video game industry was suffering from a recession, Nintendo upped the ante by introducing a system with state of the art 8-bit graphics. More importantly Nintendo introduced a lineup of higher quality video games. Atari, the old home console champion, began producing lower quality games, leading to an over saturated video game market. When the home console market seemed like a poor investment, Nintendo jumped in to rescue the day and perhaps, save the industry.

While Nintendo entered the video game industry in 1975, the Nintendo Entertainment System launched Nintendo into the industry’s Hall of Fame. The Nintendo Entertainment System was first released in Japan in July of 1983 where it was known as the Famicom (Family Computer). On the heels of the video game recession of 1983, Nintendo needed to market its console as an “entertainment system” to American parents, advertising peripherals that looked like toys such as R.O.B. the Robot and the light gun. Nintendo took a risk by releasing its console as a loss leader, Nintendo took a loss on the sales of the console to keep it affordable for consumers. Nintendo hoped to make its profit on the games, the gamble worked.

Released with Super Mario Bros, the console and game became instant hits. Super Mario Bros became an instant classic, inspiring a series that has spanned four decades. Super Mario 3 was Nintendo’s second best-selling game, selling over 17 million copies. The Nintendo Entertainment System saw the beginnings of other first-party mega hit franchises, including The Legend of Zelda and Metroid series; and continued development of their own arcade series like Donkey Kong. An immense library of games was for the most part heavily vetted by Nintendo, resulting in a higher quality of games. Tough standards on third party publishers gave Nintendo a stranglehold over quality games for this generation, but these tight regulations caused animosity among some third party developers; leading to strained relations in the future. However, a lineup of quality games gave Nintendo legitimacy.

The NES introduced the d-pad game controller to the home console, an innovation which is still featured by home consoles. The NES featured more sophisticated 8-bit graphic capabilities than previous 8 bit consoles, including more colors and hardware scrolling which enabled boards to scroll past the field of view on a television screen. Hardware scrolling was key to the platformer, the most popular type of video game during this and the next generation. The graphics did not quite match the arcade, but the console ports of arcade games were usually close enough to their arcade equivalent for gamers to enjoy a relatively close arcade experience at home. Although the toaster design of the original NES was flawed (it either malfunctioned or completely broke for most owners), it still managed to revolutionize home video games.

On Christmas Day of 1987 I was forever indoctrinated into the Nintendo universe, receiving an NES with Super Mario Bros and a copy of The Legend of Zelda. Earlier that year we moved to a new home, and I, to a new school. My one friend at my new school kept telling me about Nintendo and The Legend of Zelda, we played it in the school yard. I did not quite understand what it was, but I knew I wanted it. More importantly, Santa knew I wanted it, and I got it. I had many happy Christmases as a child, but this Christmas and this console held the most magic for me. It was the first video game console I ever owned and it was the last Christmas Santa would personally deliver presents to me. (I just HAD to figure it out!)

In 1973 Sega began producing its first arcade games, going on to be single most prolific producer of arcade games in history. Ten years later Sega had become introduced the SG-1000, its first home video game console. The SG-1000 was released in Japan the same day as the Famicom with some success, but was an overall failure. A few revisions to the console are referred to as the SG-1000 series, but this console paved the way for the the Sega Master System a couple of years later.

The Sega Master System was the second highest selling system of the 8-bit era.

The Atari 7800 tried to propel Atari back into the industry, but was not properly supported. This was a time of flux for Atari, in which the company split into two divisions and pivoted their goals. All in all, the 7800 managed to make money for Atari, backwards compatibility and a cheaper price tag were attractive options. Even though it did turn a profit, the 7800 did not improve its reputation as an antiquated video game system. The king of the previous generation, Atari would finish a distant third for this generation.

The Atari 7800 featured backwards compatibility with previous Atari systems, but it’s library of current generation games was very slim; only 59 games. By this point, many third party publishers were already clamoring to create games for the new king, the Nintendo Entertainment System. Atari’s biggest hits were games like Asteroids and Pac-Man, games that were already several years old. The gaming library failed to evolve with its consumer base. These games were also available for the NES, and with better graphics.

A big selling point for the Atari 7800 was backwards compatibility…