The eighth generation of gaming was introduced in 2012 with the Nintendo Wii U, but it is the PlayStation 4 who would be king. 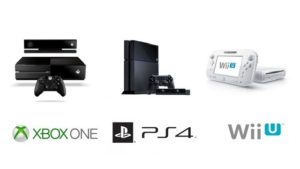 The eighth generation of gaming can be characterized as the first generation to specialize in the mid-generation console upgrade. While previous generations have seen this phenomena before in the form of cosmetic or more compact upgrades, this will be the first generation to witness a console war predicated on the idea of mid-generation hardware upgrades. Sony and Microsoft went back and forth, introducing more and more powerful hardware to win the hearts of consumers; many of whom are upgrading from high-definition television displays to ultra high-definition, also known as 4K. High-definition gaming would be standard for all developers, while Microsoft and Sony competed to upgrade to consoles with 4K capabilities.

Although the Wii U ushers in this generation, its disappointing sales results in Nintendo abandoning the hardware within five years. The Nintendo 3DS continues to dominate handheld sales, softening the blow of the disappointing Wii U. In 2017, Nintendo introduces the first true hybrid console, the Nintendo Switch. At best, this innovation has the potential to influence the future of the industry; an industry suffering from the competition of mobile gaming. At the very least, the Nintendo Switch has helped return Nintendo’s legitimacy in developing home consoles. As history continues to write itself, the Nintendo Switch may be recognized as the beginning of the ninth generation of gaming consoles.

Great concept, poor execution. The Wii U would inspire a legion of loyal Nintendo fans, but it may be seen as Nintendo’s biggest disappointment. So much so that Nintendo ceased its production in 2017 to focus on the Nintendo Switch. The Wii U had hybrid console aspirations, but it’s hybrid nature was very limited. The Wii U has an awkwardly bulky controller that allows gamers to play games in other rooms or other locations with a Wi-Fi connection. Mobile gaming without a Wi-Fi connections was not possible.

Nintendo produced a few classic games for the Wii U, but the console was doomed by a lack of third party support. Having inferior hardware to the PS4 and Xbox One, most third party games could not run or look the way they were supposed to on the Wii U. Being the HD generation, graphics meant everything for many gamers.

Backwards compatible is a mixed bag for the Wii U. Nintendo offered a diverse yet limited offerings. From Nintendo’s Virtual Console, players could purchase games from any of its previous systems. However, the selection was cherry picked, not every title was available. Also, some of these games were relatively expensive when considering the fact that ownership of these games did not transfer from one system to another. If a player wanted to play Super Mario Bros on 3DS and on the Wii U, the game would have to be purchased twice.

For the third time in the past four generations of home consoles, Sony ruled the gaming world. The PlayStation 4 came out one week before the Xbox One, was priced at $100 less than its rival, had slightly better graphic capabilities, and had none of the proposed restrictions on games that Microsoft threatened but removed before it released the Xbox One. Four years later Sony would produce an upgrade, the PlayStation 4 Pro. Although it is less powerful than the Xbox One X and could only produced upscale checkerboard rendered 4K graphics, it came out a full year before Xbox’s console upgrade.

The PS4 plays 4K blueray disks that hold up to 50 gigs of data, games can extend past this capacity with downloadable updates. Both systems stream media and play blueray disks, but the PS4 Pro streams video as on 4K. Sony opted not to go with a 4k blueray drive in the PS4 Pro because it would allow Sony to set a lower price point for the lack of hardware.

The PS4 is not backwards compatible with any PlayStation games in any of the previous generations. However, the PlayStation store sells PS2. games with upgraded graphics. Also, a subscription to so PS Now gives players access to a library of games from both the PS3 and PS4 by steaming these games to their consoles.

The Xbox One is a tale of two cities, if each of those cities represents Microsoft’s PR for system. Before the system launched Microsoft proposed a host of consumer unfriendly restrictions for the Xbox One. The system would have to be online at all times, and the purchase of physical games would be locked to the original owner, blocking the resale of games. Internet backlash forced Microsoft to back off of these restrictions, but it was too late, the PR damage was done. Many consumers like myself would turn to the PS4, which boasted slightly better graphics and a price tag of $100 less than the Xbox One, reminiscent of PS1’s undercut of Sega Saturn.

Some cool early features lost support in place of alternative features that appealed to more gamers. The early Xbox One consoles were sold with the Kinect, a motion control sensor bar. The Kinect made the console cost an extra $100 than the PlayStation 4, and it made developers focus vital gaming power on the Kinect, when the Xbox One was already less powerful than the PS4. After a while Microsoft mostly abandoned the feature with the elevation of Phil Spencer, who shifted Xbox’s focus back on games. The system was upgraded two times with the Xbox One S and X models, both capable of streaming 4K video and playing 4K blueray, the latter capable of rendering true native 4K graphics; surpassing the capabilities of the PS4 Pro. Also, the Xbox One became backwards with games from both of its previous generation consoles, the original Xbox and the Xbox 360. Whole not 100 percent backwards compatible, Microsoft continues to upgrade its library of backwards compatibility. These changes have been received very positively by gamers, helping Microsoft regain some of the PR lost early in this generation.

Nintendo hit the reset button with the Switch. Some consider this entry to be the beginning of the ninth generation of gaming, but I see the Nintendo switch as the fulfillment of the the original vision for the Wii U. The Wii U had a limited hybrid console, one that required the bulky handheld controller to be connected to the same Internet network. The Nintendo Switch is a true hybrid experience, games can be played in the dock on a big screen HDTV, or as a completely free handheld, one that does not require a network connection.

Games like the long awaited The Legend Zelda: Breath of the Wild drew consumers to the system. At present, the games library is largely made up by ports of both Nintendo and third party games. This is great for gamers who missed out on experiencing generation old games, but has left some gamers clamoring for more new games. Third party support has improved from the previous generations, but it is still limited by the Nintendo Switch’s inferior hardware, compared to the Xbox One and the PS4. Nintendo has been slow to add true backwards, but plans to give subsription holders access to 20 NES games. Considering multi-generation of classic games, many gamers believe and hope Nintendo can do more with this service.

An excellent gaming console that often doubles as an excellent media peripheral. It was built on the premise of streaming PC games in 4K from a gaming PC to an HDTV, and a subscription service to GeForce Now, in which gamers can stream a selection of modern games. The system runs an Android system, giving it a lot of versatility. It plays games from the Android market and it can run accurate emulators of gaming systems up until the PS1. It also serves as a powerful multimedia tool, giving users the ability to stream all major forms of streaming media in upwards of 4K resolution.

Nvidia has long been the dominant force in graphics cards. Nvidia never pushed to make this console compete with the big boys, because its versatility gives it the ability to do so. It is limited, but current Internet speeds, which have greatly improved but are not at the point in which streaming games can compete with natively run games. The technology to power this console would be used to power the Nintendo Switch.

Once again, Nintendo is king of the portable gaming world. A few different iterations of this system, and titles which have built upon the popularity of Nintendo’s library has allowed this system to dominate.

This system had a lot of promise, but fell to the wayside a bit too early for PS Vita owners. It was backwards compatible with the PSP and the PS1, allowing users to re-download previously purchased titles. The PS4 was designed to stream its games over an Internet connection to the PS Vita. Many PS Vita games were cross save compatible with the PS4, allowing users to continue a PS4 game on the go, and vice versa.

The bane of this system was threefold. Firstly, Sony insisted on using a very expensive proprietary memory system for this console, increasing the expense of owning this system. Secondly, the increased popularity of mobile gaming, which made the purchase of gaming unnecessary. Thirdly, the previously stated factors and thunbeatable portable gaming opponent of Nintendo hurt the sales of this console, and in turn have led to Sony abandoning support of this console at an earlier stage of its life. Essentially, Sony pulled the plug on this console, instead of doubling down on its bet on a losing horse.

Never a major contender, the Nvidia Shield Portable has most of the same capabilities as the Nvidia Shield TV. It streams games from a PC and from GeForce Now, but a network connection is required. For non-network portable gaming this system can run emulators and games from the Android market. The Android market is ironically one of this system’s downfalls, the popularity of mobile gaming have made video game consoles and other hardware unnecessary from the view of many gamers.