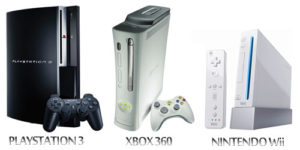 The Xbox 360 used dual layer DVDs that held 8.7 gigs of data. It was capable of playing DVDs, high definition gaming, and was backwards compatible with many games from the original Xbox.

For most of this generation the Xbox 360 held onto first place for console sales. However, late in the generation PlayStation surpassed it in sales. Third party developer support was excellent for these systems, in many ways the Xbox 360 and the PlayStation 3 were more of direct competitors with one another, rather than with the Nintendo Wii.

The first model of the Xbox 360 had unreliability issues with its hardware. The most common problem was the Red Ring of Death, an indication the console needed to be serviced. This was due to a lack of proper ventilation that led to overheating. Later versions of this console, the Xbox 360 S and the… were much more reliable hardware because of better ventilation.

The PlayStation 3 was in many ways a step back for Sony’s console. After winning the console war the previous two generations, the PlayStation 3 trailed both of its major competitors for most of this generation; eventually edging out the Xbox 360 for second place. Early issues for the PS3 was a high price point, and the infamous “cell processor” which made it difficult for developers to develop for.

The PS3 was capable of playing blueray media, and its games were also stored on blueray disks holding 24 gigs worth of information. The PS3 became a popular way to stream media such as Netflix, or local media to an HDTV. The PS3 could be connected to a tube TV, but an HDTV produced the best results. Some early versions of the PS3 were backwards compatible with both the PS1 and PS2, but the feature was dropped because of the expense needed to maintain this hardware.

The Nintendo Wii would go on to sell the most consoles of its generation, the first time Nintendo would win the console war since the Super Nintendo. Although the Wii’s graphics were inferior to the PlayStation 3 and the Xbox 360, it’s motion-based controllers gave it a family friendly aura the other two consoles didn’t have. Top that off with the fun of Nintendo games, and the Wii was a winning formula. Although some third party games appeared on the Wii, the strength of its lineup lay in Nintendo exclusives.

The Nintendo DS continued Nintendo’s grip on handheld superiority. Perhaps the biggest innovation of this system is its clamshell design, probably the best design to date for portable console. This design protects the screen, allowing gamers to close their consoles when not in use; making a carrying case a luxury rather than a necessity.

The PlayStation Portable, or PSP as it was more commonly known was Sony’s entry into the portable gaming market. While it can be seen as a failed coup to Nintendo’s dominance of the handheld market, it was a very respectable alter active for gamers.

The PSP played UMD disks and digital downloads. Owners of digital downloads of PS1 games had a cross buy and cross play option. These digital versions of the games could be played on both the PSP and the PS3. Although these were not current generation games, it gave gamers the option to play the same game at home or on the road, transferring the game save back and forth.