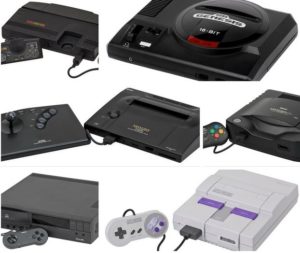 The 16-bit era began in 1987 when the NEC TurboGrafx-16 came out in Japan, but it was the Super Nintendo who would be king.

The Turbo Grafx-16 was NEC’s first and most significant foray into the home console market. It may have had the edge in graphics in Japan for the better part of the first year of existence in Japan, but it never garnered proper third party support. The Sega Genesis beat it to American store shelves by two weeks, dooming any advantage it may have had.

NEC paired with the now defunct Hudson Soft, who developed the first party games for the console.

Some questions the legitimacy of the Turbo Grafx-16 being labeled as the first 16-bit console. The console has an 8-bit CPU and two 16-bit graphic chips. Although it could be deemed a hybrid 16-bit console one thing was clear, its graphic capabilities were superior to the NES or any other home console that came fore it… However, the Turbo Grafx’s reign as the home console with the best graphics would come to an end a year later when the Mega Drive came out. The Mega Drive’s US counterpart, the Sega Genesis saw an American release two weeks before the Turbo Grafx-16 was released in the US.

The Sega Genesis was the first 16-bit console to hit the US market. It’s graphics were superior to the 8-bit kingpin, the Nintendo Entertainment System and thus, gave Nintendo a run for its money during the 4th generation. Sega turned up the heat with its can of hata-rade campaign, “Genesis does what Nintendon’t” commercials. The Sega Genesis had many good games, including first and third party publishers.

With the Sega Genesis, Nintendo had its first major competitor and the beginnings of the first great console war…

While the newer Super Nintendo had superior colors and sound, the Sega Genesis boasted “blast processing technology” which allowed games such as Sonic the Hedgehog to achieve lightening fast speeds.

The Neo Geo boasted arcade graphics superior to the Sega Genesis and the Super Nintendo. The problem was, its high price point and its lack of third party support.

The last of the major players to enter the 16-bit Era of the fourth generation, the Super Nintendo Entertainment System would go on to be king, albeit with some major competition from Sega.

Apparently some parents were outraged by a system which had a price tag of $199.99 (see inflation adjusted price above). Luckily, my parents were not included in this outrage. I remember the envy I felt when my friend got to open his SNES right away and I had to wait a whole month until Christmas! I even had the audacity to complain to my parents how unfair it was. My parents never used corporal punishment with me, but if they had at this point, my future self would be fully supportive of it.

Game Boy became was the first true portable console in which one could switch out game cartridges. While the original Game Boy had a strange monochrome screen with green and black colors, it firmly established Nintendo as the king of the portable gaming world for generations to come. Game Boy had a few advantages over its graphically supierior, colored gaming competitors. It beat both the Atari Lynx and the Sega Game Gear to the market. As a non-color portable system, it had much stronger battery life than its colored competitors, making it the more mobile option. Game Boy had the marketing power, third party support, and legitimacy of Nintendo. Most importantly, Game Boy games were just fun. Simplified versions of NES games had the branding of Nintendo, and could achieve a level of complexity. As Super Mario Bros did for the NES, Tetris made Game Boy an instant success. One did not have to be a professed “gamer” to enjoy the puzzle challenge of Tetris while commuting or traveling.

In many ways the NEC TurboExpress was the predecessor of the Nintendo Switch. It utilized the same game disks as did its home console counterpart, this fact blew my mind as a kid! It would be like playing my Nintendo cartridges on-the-go. The key difference from the Nintendo Switch is that the TurboExpress was a separate piece of hardware, and an expensive piece at that. That, combined with Turbografx lacking a lineup of quality, competitive games to Sega and Nintendo spelled its doom.