During the 2018 E3 presentation Ubisoft showcased its next installment of the franchise, Assassin’s Creed Odyssey. Set to take place in ancient Greece, the game will not be a direct sequel to Assassin’s Creed Origins. The game is set to take place in 431 B.C., an era known as the Golden Age of Athens and also the first year of the Peloponnesian War. Enter Socrates and company, this should be interesting.

The idea of a trilogy including Egypt, Greece, and Rome has been floated around the web for the past couple of years, in some incarnations “rumorville” purported that this trilogy could follow the story of one protagonist similar to Ezio’s journey in Assassin’s Creed II, Brotherhood, and Revelations. This idea, however, has been shot down by the fact that this story takes place three centuries earlier than Bayek’s story, and the name drop of new controllable assassins Alexios and Kassandra. Bayek could return as a character in the next installment if it were to take place in Rome. Logically it seems as though the next story will take place in ancient Rome during the time of the Roman civil wars, which takes place a few years after Bayek’s adventures in Egypt. Enter Julius Caesar and company and all I can type now is, wow!… Let’s not get too far ahead of ourselves, Assassin’s Creed Odyssey has great potential.

Ubisoft’s bi-annual leak (formerly an annual leak when it released an Assassin’s Creed game each year) is credited to the French website, JeuxVideo-Live, who leaked a picture of a key chain with the title, and what appears to be a Spartan helmet. 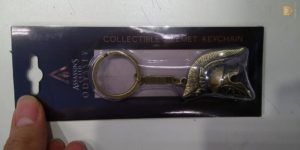 Ubisoft later confirmed this leak ahead of E3 2018 with a Tweet and a short video, depicting a Spartan soldier kicking an unknown soldier into a deep canyon.

It has been suggested online that this parallel’s the famous incident in which the Spartans kicked a Persian envoy into a hole, an act of aggression against a diplomat resulting in war. This incident, which preceded the Battle of Thermopylae, took place almost fifty years earlier than the events of Assassin’s Creed Odyssey. The legend of this story should remain fresh in the minds of the characters in this game.

In Assassin’s Creed Odyssey, you will have the choice between a male and female assassins Alexios and Kassandra. It appears as though once you choose a character, you are locked into your choice for the duration of your play through; unlike Assassin’s Creed Syndicate, in which a player could switch back and forth at will.

The prospect of your assassin splitting time between Sparta and Athens at the outbreak of the Peloponnesian War could be amazing! For me, the allure of the Assassin’s Creed franchise has been how well a fictional story can be interwoven into history. Ubisoft often does a good job of blending history with narrative. Occasionally they bend history to meet the purposes of story telling. Once in a while they completely bungle history and tell a less compelling story. Sometimes history is colorful enough, we don’t need to embellish. One example of this was when Ubisoft completely bungled the death of Blackbeard in Assassin’s Creed Black Flag, one of the most epic deaths in history. In reality, Blackbeard’s crew was passed out and hung over, while his ship was secretly boarded by an illegal raid (Lieutenant Maynard left legal jurisdiction by crossing state boundaries into North Carolina). Blackbeard fought ferociously and purportedly had at least five musket ball wounds, and over 20 cutlass wounds before succumbing to his fate. Ubisoft’s interpretation of this event… very anti-climatic in comparison.

Ubisoft, feel free to take a few historic liberties; but when it comes to amazing stories like that of Socrates and company, don’t stray too far from the truth. Feel free to mix in some chance encounters with historical characters. Socrates did not record any of his own history, so Ubisoft has some wiggle room with his character. Hopefully, Ubisoft stays true to the essence of these historical characters and the events that surrounded them. As the story goes, truth can be stranger than fiction. The stories of ancient Athens and Sparta have engaged us for millennia, there is no need to alter an already engaging story.