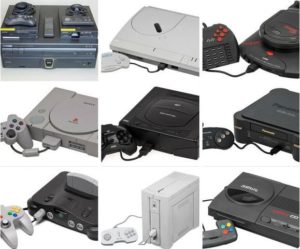 The 3D era introduced both 32-bit and 64-bit graphics, and CD based games. It began with the 3DO Interactive Multiplayer in October of 1993. However, it was the PlayStation who would be king.

The 3DO Interactive player…

About a month later the Atari Jaguar came out…

A year later in 1994 the Sega Saturn debuted in Japan. Sega began to feel the heat from Sony and the upcoming PlayStation. After announcing to American audiences the price would be $399, Sony president infamously took the stage, dropped his scripted speech for one simple word, “$299.” By undercutting Sega by $100, and offering a similar product, Sony won over many fans before the launch of their initial console. Sega scrambled to launch its console, and the rest is history. Sega’s paranoia resulted in many of its games being rushed to production, hence, hurting its quality.

Sega didn’t go down without a fight, Sinking a lot of money into its advertising campaign. This resulted in Sega continuing its “hatarade” marketing campaign…

In December of 1994 the Sony PlayStation was released in Japan. During the development of the SNES, Sony was working on a CD attachment for the SNES. Long story short, Nintendo became paranoid over this relationship with Sony and left Sony at the altar. Sony appealed to…, who also left them at the altar. By doing so, Nintendo created its greatest nightmare, Sony decided to launch the PlayStation on their own. The PlayStation would go on to set a new sales record, breaking the previous sales record of the Nintendo Entertainment System. Boasting 32-bit graphics, the PlayStation could achieve some of the earlier 3D graphics, but more importantly developed a host of great games, both first and third party. Frustrated with Nintendo’s Draconian restrictions on third party developers, many developers switched their focus to the PlayStation.

The PlayStation was also a CD based console, which made it cheaper to develop for, and the medium provided more storage for games, and thus gave developers more freedom. A typical CD held 700 megabytes of memory, much larger than any disk-based game before it.

In 1996, the Nintendo 64 was released first in Japan, and later in the US. The Nintendo 64 was a quality system with quality games, many of these games which live on in the hearts of gamers today. However, this will be the first Nintendo home console which failed to win the console war for its respective generation. The major mistake Nintendo made with this system was sticking to the older and antiquated technology of a cartridge-based system. The Sega Saturn and the Sony PlayStation switched to disk-based systems, which were cheaper to produce and gave developers more storage for creating their games.

Cool idea, poor timing and execution. The 32X was a peripheral to the Sega Genesis that plugged into the top of the console, and upgraded the graphics from 16 to 32 bits. The problem was timing and a lack of game library.

Great idea in theory, but poor timing. I wish I had this thing as a kid, I imagined doing the same thing with NES games. The first true fifth generation handheld system was the Sega Nomad was another innovative concept, abstructed by poor timing and a high price point. Like the Turbografx Xpress, it played console games on the go. Like the Turbografx Xpress, it had a high price point that priced itself out of the market.

The fifth generation of handheld consoles had an interesting array. The Nintendo Virtual Boy shows Nintendo’s willingness to experiment. Sometimes it worked, sometimes it didn’t. This time it didn’t work, the Virtual Boy was Nintendo’s second worse selling console of all time.

The WonderSwan had some decent third party support, bringing over Final Fantasy games and arcade classics such as Space Invaders. However, the controls were considered inferior and it lacked basic ports, including a charging port and one for headphones. Bandai believed its monochrome system could defeat Game Boy Color, the same way Game Boy defeated Atari Lynx and Sega Game Gear. Bandai could not hope to challenge the monolith that was Nintendo, especially since the Game Boy had evolved into a color version.