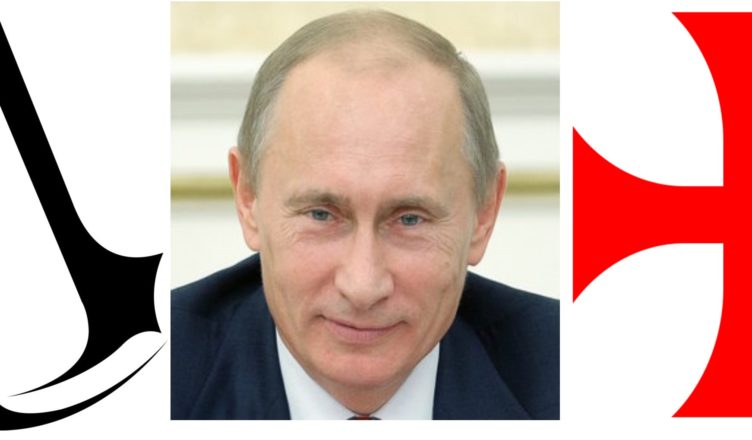 From KGB to President of the Russian Federation, Vladimir Putin’s career has been the envy of the Templar order. In 1964, at the age of eleven, Putin begins his first Templar training learning Judo under the tutelage of his first Templar mentor, Anatoly Rakhlin. The Templars did not reveal themselves to Putin until his first year at the 401st KGB School at Okhta, Leningrad. There, a young and ambitious Putin readily accepted this offer, proving himself worthy to the Templars as counter-intelligence spy.

Vladimir Putin was a talented agent of the Russian branch of the Templars, the KGB.  Post-Soviet Russia was ripe for a man of ambition, such as Putin. As Putin’s skills and prestige grew, he became tired of Yeltsin’s carelessness and drunkenness. As a result of Yeltsin’s ineffectual rule, Putin and the FSB forced Yeltsin to resign his presidency. As the the acting Prime Minister, Putin became Russia’s next president on December 31, 1999. This begins Putin’s reign of terror, as he eliminates political opponents; assassinating and poisoning several members of the media. Putin would begin his plan for world dominance, trying to extend his influence over sovereign nations, beginning with nations who were once Soviet Republics.

Journalist Dmitri Ivanovich is the protagonist of this adventure, a distant cousin of Desmond Miles and a descendant of assassins; including Alexei Ivanovich. As Dmitri becomes more absorbed into conflict with Putin’s regime he encounters allies, including ill-fated journalists Anna Politkovskaya and Alexander Litvinenko. Dmitri will hunt down Russian agents and spyies, including the estranged Edward Snowden. Will Dmitri stop Putin before he achieves world dominance? The showdown is sure to be challenging; Putin is skilled in several martial arts disciplines and has been trained by Templar agents through the facade of the KGB.

An expansion pack allows gamers to play from the perspective of Putin, rising through the ranks of the KGB to President of Russia. Early early missions allow you to control a young Agent Putin, while later assassinations will be carried out through teams of Putin’s FSB agents.

Set in the present day, the story flashes back to Dmitri’s assassin great-grandfather, Alexei Ivanovich. Alexei falls short of eliminating Vladimir Lenin during the Bolshevik Revolution. The story of opposition to autocratic rule in Russia comes full circle with Dmitri Ivanovich in this new installment of Assassin’s Creed.